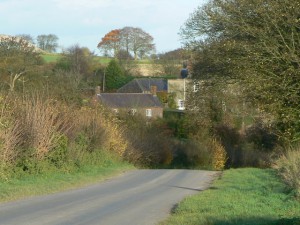 Uffcott village stands at the head of a gently sloping valley watered by a head stream of the Kennet. The township, like Bincknoll, was of moderate prosperity in the 14th century and in 1377 had 46 poll-tax payers.  In the 16th century, however, assessments for tax were low compared with those of neighbouring townships.  The pattern of settlement at Uffcott has changed little since the 17th century.  The buildings of the village are gathered east of the stream and the pond which it feeds. South of the pond the old Highway-Wroughton road crosses the stream and then winds uphill through the village.

A brick house east of the pond and a row of thatched cottages north of the house are probably of the 18th century or earlier. There was an inn called the Harrow at the east end of the village in the late 18th century but it was closed after 1836.  Most of Uffcott House, on higher ground south of the road, and most cottages are of the 19th century.  The east portion of Uffcott House dates in part from the 17th century.  A west range and a new south front were added in the early 19th century.  A few 20th-century houses have been built at the east end of the village.  Hangars belonging to Wroughton airfield were built in the parish east of Uffcott village after 1937.

Uffcott was probably held with Elcombe in Wroughton by members of the Lovel family from the 13th century or earlier.   John Lovel, Lord Lovel, died seised of the manor in 1361 and it passed with the title to Francis, Viscount Lovel, on whose attainder in 1485 it was forfeited to the Crown. In 1512 it was granted to William Compton and his wife Werburgh. With Elcombe manor it passed from father to son to William, Lord Compton, who sold it in 1605 to Thomas Sutton.  Uffcott was among the endowments of the Charterhouse hospital founded by Sutton in 1611. The governors of the Charterhouse sold the manor in 1919 to Wiltshire county council.  It was bought c. 1922 by H. J. Horton and in 1981 Mr. S. J. Horton was the owner. 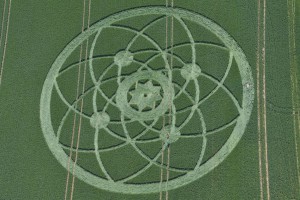 Uffcott’s claim to fame is that crop circles often appear in the wheat field behind the village, along the Marlborough road, below Hackpen Hill.  This one was photographed on 15 July 2013.