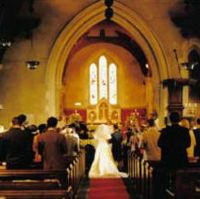 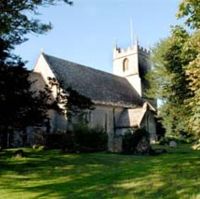 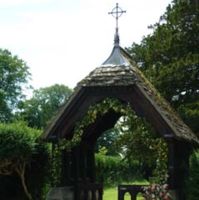 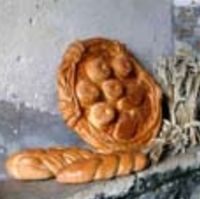 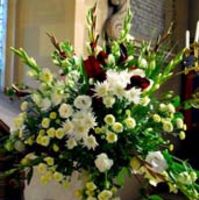 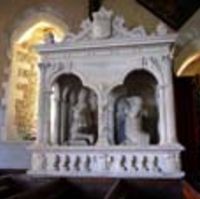 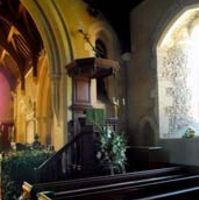 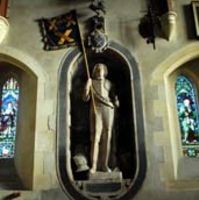 St Peter ad Vincula Church, Broad Hinton is the only Upper Kennet church to have its own choir and team of bellringers.   It’s therefore a popular choice for weddings,  particularly since the new Village Hall (2009), a highly desirable venue for wedding receptions, is only a short walk away.

To enjoy the beauty of the church at its best, come to one of the regular Flower Festivals.  Special services to look out for include the Harvest Festival, always a major event in the countryside, the Remembrance Sunday service preceded by muffled bells, and the Nine Lessons & Carols Service in a candle-lit church in mid-December.

The church is kept open from dawn to dusk every day.  To visit it, walk down the High Street with your back to the 1743 School, past the Crown pub, between the well and the thatched cottages and you come to the lych gate of the churchyard of St Peter ad Vincula, “St Peter in Chains”.  This is a rare dedication – of the very few churches called by this name, the most famous is the Chapel Royal in the Tower of London.   That dedication, however, only dates from the late nineteenth century, probably from the 1879 restoration by C E Ponting.   Previously the church was dedicated to St Mary.

Approaching the church porch, look out for a small tombstone on the right, just past the east end of the church.  It reads

“As thou art now, so once was I

In health and strength, though here I lie.

As I am now so shalt thou be

This verse is not unique – other churchyards have variants.  There is a well known retort:

Until I know which way you went”

Broad Hinton is listed in William the Conqueror’s Domesday Book of 1086 (as “Hinton” – “hill town”) and there is evidence, such as Saxon window-heads, that there was a church here in Saxon times, although the list of vicars of St Peter ad Vincula before 1299 has been lost.   The stone coffin in the porch may be Saxon.

Turning left as you enter the church, the fifteenth century tower has a peal of six bells, the oldest three being dated 1664.  Prior to 1930, the bells were rung from a loft half way up the 61 feet tower.  This position was re-created in 2007 when the choir vestry was moved to the ground floor of the tower to facilitate the introduction of a lavatory, and the bellringers were given a new platform above the vestry.

The tower was repaired in the 1870s, when the pinnacles were added, but in 1928 the south pier of the tower arch was found to be bulging inwards and giving way.  The tower was shored up with timber while new foundations were laid and survived a gale while standing on only three legs.

Walking up the nave towards the altar, look right at the Sir Thomas Wroughton monument dated 1597.   There is a legend that he came home from hunting to find Anne, his wife, reading the Bible instead of cooking his supper.  He flung the Bible in the fire, but she retrieved it, badly burning her hands.   Because of his blasphemous behaviour, Sir Thomas’s hands withered away too, as did those of his children – Anne holds a partly burned Bible.   Sir Thomas was Sheriff of Wiltshire, yet is listed among poachers of the King’s deer in the records of the Wardens of Savernake Forest!

The sixteenth century was a bad time for this church.   In 1553 parishioners refused to receive communion for fear of falling masonry.  The broken stones allowed so many birds into the then chancel that the minister couldn’t stand by the communion table and there was no seat for him during the reading of the psalms.  John Batewell, a vicar appointed in 1576, was officially censured for his inability to preach, neglect of catechizing and failure to wear the prescribed dress.

However, the situation was recovered.  On the left in the nave is a water colour of the church, painted in 1795 but showing the church as it was after major rebuilding in the seventeenth century.   The text underneath says that the church was “new built in the year 1634; brought to perfection in the year 1635; finished and beautified in the year 1636; a new pulpit erected in the year 1672; the first loft in the tower was boarded in 1676; the belfry and church porch paved in 1677”.  The wonderful tie and hammer beam roof of the nave belongs to the 1634 rebuilding.

In the top left corner of the nave is a flight of stone steps which shows there was once a medieval rood screen to screen the chancel off from the laity, probably with a figure of Christ on the cross above.

Next to it is George III’s Royal Arms, painted in 1763 and cleaned in 2008.   Note the fleur de lys in the shield – George III was the last English monarch to lay claim to be King of France, formally abandoning that lost cause in 1800.

The chancel contains some interesting monuments to the Glanville family.  Sir John was Speaker of the House of Commons in 1640.  He burned his own Manor House rather than let it be used by Cromwell’s troops.   A famous lawyer, he spent three years in the Tower of London after the Civil War for holding illegal Assizes and later served Charles II, as he had served Charles I, as Sergeant-at-Law.

Lt.-Colonel Francis Glanville, killed fighting for Charles I in 1645 at the battle of Bridgewater in the Civil War, has his helmet, gauntlets and a replica of his sword (the original is in the Royal Armoury) displayed above him.   The Latin inscription ends “A greater hero England never saw, happily she did oft produce his equal”.  The small reclining figure of a woman in her shroud at the bottom of this monument (usually hidden behind a bench seat) appears in Pevsner’s guide to Wiltshire: “her agonised features are not easily forgotten”.

A panel from the Duke of Wellington’s funeral carriage (1851) hangs in the chancel in a glass case.  The victor of Waterloo owned land locally.

The Sir William Wroughton monument on the right in the chancel describes Elizabeth I as Queen of England and France although Mary, her predecessor, had lost Calais, the last remaining English possession in France in 1558 and Elizabeth renounced her claim to Calais in 1559.

The church owned an 11oz chalice in 1553.   Possibly that same chalice, together with a paten and two flagons given in 1677, were stolen in 1756 but soon recovered.   Today these items are kept securely in a bank and only used on ceremonial occasions.