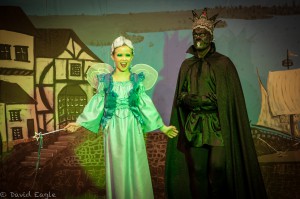 To this day “tradition” says that the Pantomime villain should be the first to enter, from the “dark side”, stage left, followed by his adversary the good fairy from stage right. This echoes the tradition in medieval times when the entrances to heaven and hell were placed on these sides.

By the middle of the nineteenth century the vogue for ladies to take on the heroic roles of “Jack” or “Dick Whittington” or “Aladdin” was beginning, and with the rise of Music Hall it became the rule. Quite simply, the Victorian male, living in a society where even the legs of the parlour piano were covered for modesty’s sake, craved the vision of a well turned calf, or shapely ankle.  Whilst ladies were corseted, crinolined or bustled on the street, artistic license allowed ladies upon the stage to wear costumes that revealed shapely legs in tights – on condition that they were playing a male role! 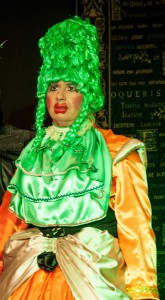 The role of the Pantomime Dame stretches back to the earliest origins of the theatre, when girls and young women were played by youths, and old women by men – often comically. The earliest ancestor of the comedic is possibly Mrs. Noah in the miracle plays of the Middle Ages. ‘Dick Whittington’ has had a cook as Dame since its first performance, with the title ‘Sara the Cook’ given in most cases. Even after the restoration in the 17th century, when actresses entered the theatre, many were loath to play older parts, and the convention continued. During the Regency the roles of witches, characters like ‘Mother Skipton’ and old harridans were played often by men. Grimaldi played several female roles, including the Baroness in ‘Cinderella’.

“Pantomimes are not what they were”

“Pantomime is no longer what it used to be. They have had their day”

“Pantomime seems at present to hold its own, I do not see how it can continue to do so”

The above quotes might be mistaken for recent press comments. In fact they date from 1831, 1846 and 1882 respectively.
Pantomime in 2015 is still alive and kicking, especially in Broad Hinton!