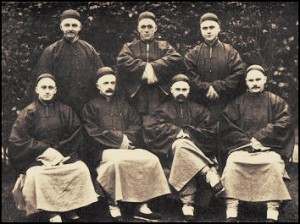 Directed by Sally Cartwright
Letter from the General Programme
Letter from the General Poster
The play is set in a Mission Station for orphaned children in “an Eastern Country” during the year 1950. A new Communist government has taken over and there has been persecution of Nuns and Priests throughout the province. The Mission has been cut off from the local village and the orphaned children have been removed.

A group of five Irish Nuns run the Mission and their resident Priest, a German national, has been captured and tortured by the Communist regime. The Priest manages to escape and Captain Lee and his soldiers are sent to the Mission because it is suspected the Priest will make his way there.

Unbeknown to Captain Lee, the Reverend Mother is already hiding the Priest who managed to reach the Mission before the soldiers.  In the meantime the British Consul for the area together with his wife Ruth visits the Mission. The British consul has exit visas for all of the Nuns and, due to the fact that he is unaware of the hidden Priest, cannot understand why the Reverend Mother is reluctant to leave. Both the Consul and his wife have a deep-seated dislike of Germans because of their son’s death in the Second World War. Ruth begins to suspect that the Nuns professed lack of knowledge regarding the location of the German Priest may not be as truthful as they would have her believe!

She is not the only one who is unconvinced of the Nuns innocence in the matter as the sadistic Captain Lee starts to put pressure on the nuns to reveal the whereabouts of the Priest.

As events are unfolding, a letter arrives from Mei Cheng the governing General of the province addressed to Sister Magdalen. This elderly Nun looked after Mei Cheng when he was an orphaned boy many years previously and is the General’s Godmother.

Can this letter, together with an ancient Oriental curse visited upon the cowardly Captain Lee culminate in the escape of the Nuns together with their fugitive Priest? We shall have to wait and see.