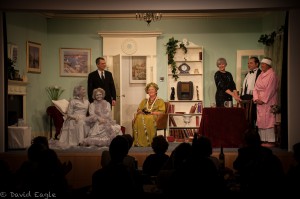 The title of the play is taken from Shelley’s poem “To a Skylark”, (“Hail to thee, blithe Spirit! / Bird thou never wert”).For some time before 1941 Coward had been thinking of a comedy about ghosts. His first thoughts centred on an old house in Paris, haunted by spectres from different centuries, with the comedy arising from their conflicting attitudes, but he could not get the plot to work in his mind.  He knew that in wartime Britain, with death a constant presence, there would be some objection to a comedy about ghosts, but his firm view was that as the story would be thoroughly heartless, “you can’t sympathise with any of them. If there was a heart it would be a sad story.” 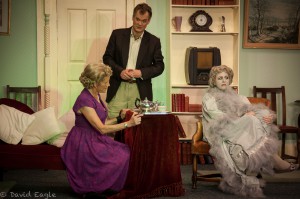 After his London office and flat had been destroyed in the Blitz, Coward took a short holiday with the actress Joyce Carey at Portmeirion on the coast of Snowdonia in Wales. She was writing a play about Keats, and he was still thinking about his ghostly light comedy:

“We sat on the beach with our backs against the sea wall and discussed my idea exclusively for several hours. Keats, I regret to say, was not referred to. By lunchtime the title had emerged together with the names of the characters, and a rough, very rough, outline of the plot. At seven-thirty the next morning I sat, with the usual nervous palpitations, at my typewriter.

Joyce was upstairs in her room wrestling with Fanny Brawne. There was a pile of virgin paper on my left and a box of carbons on my right. The table wobbled and I had to put a wedge under one of its legs. I smoked several cigarettes in rapid succession, staring gloomily out of the window at the tide running out. I fixed the paper into the machine and started. Blithe Spirit. A Light Comedy in Three Acts.

For six days I worked from eight to one each morning and from two to seven each afternoon. On Friday evening, May ninth, the play was finished and, disdaining archness and false modesty, I will admit that I knew it was witty, I knew it was well constructed, and I also knew that it would be a success.” 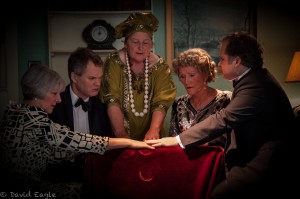 Synopsis
Charles Condomine, a successful novelist, wishes to learn about the occult for a novel he is writing, and he arranges for an eccentric medium, Madame Arcati, to hold a séance at his house. At the séance, she inadvertently summons Charles’s first wife, Elvira, who has been dead for seven years. Madame Arcati leaves after the séance, unaware that she has summoned Elvira. Only Charles can see or hear Elvira, and his second wife, Ruth, does not believe that Elvira exists until a floating vase is handed to her out of thin air. 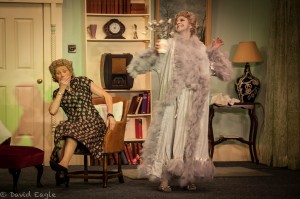 Elvira is louche and moody, in contrast to the more strait-laced Ruth. The ghostly Elvira makes continued, and increasingly desperate, efforts to disrupt Charles’s current marriage. She finally sabotages his car in the hope of killing him so that he will join her in the spirit world, but it is Ruth rather than Charles who drives off and is killed.

Ruth’s ghost immediately comes back for revenge on Elvira, and though Charles cannot at first see Ruth, he can see that Elvira is being chased and tormented, and his house is in uproar. He calls Madame Arcati back to exorcise both of the spirits, but instead of banishing them she unintentionally materialises Ruth. With both his dead wives now fully visible, and neither of them in the best of tempers, Charles, together with Madame Arcati, goes through séance after séance and spell after spell to try to exorcise them. 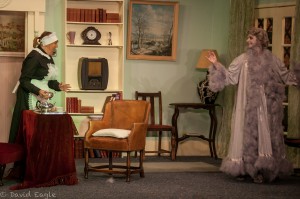 It is not until Madame Arcati works out that the housemaid, Edith, is psychic and had unwittingly been the conduit through which Elvira was summoned that she succeeds in dematerialising both ghosts. Charles is left seemingly in peace, but Madame Arcati, hinting that the ghosts may still be around unseen, warns him that he should go far away as soon as possible. Coward repeats one of his signature theatrical devices at the end of the play, where the central character tiptoes out as the curtain falls – a device that he also used in Present Laughter, Private Lives and Hay Fever.  Charles leaves at once, and the unseen ghosts throw things and destroy the room as soon as he has gone.