Winterbourne Bassett, 10 km. northwest of Marlborough, is the most northerly of three rectangular parishes, Winterbourne Monkton, Berwick Bassett, and Winterbourne Bassett, which lie across the valley of the upper Kennet.  From east to west it measures 5 km. and from north to south, at its widest point, 2 km. By c. 970 its eastern limit had been established at Hackpen Hill and it extended westwards to Stanmore on the high ground above the escarpment at Clyffe Pypard. The straight northern boundary with Broad Hinton may also have been set early. The name Winterbourne was derived from the small streams at the head of the Kennet and was shared by neighbouring settlements.  By the 13th century the suffix Bassett had been adopted from the lords of the manor. 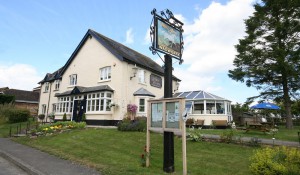 The village pub is the White Horse Inn, popular with locals from all three villages and others alike.  Its menu is inexpensive and delicious.

From Winterbourne Bassett village near the centre of the parish, the head stream of the Kennet flows south. It is fed by several tributaries, which sometimes disappear underground. One rises near the boundary north of the village, a second enters the parish 500 m. further east, a third follows a winding course from the western boundary south of Stanmore Copse. Only the valley south of the village lies below 168 m. Much of the land in the parish is flat but Hackpen Hill and the downland east of it reach heights above 259 m. and north-east of Stanmore Copse the land rises more gently to 198 m. Chalk outcrops over the whole parish; on the ridge of Hackpen Hill it is covered by clay-with-flints.