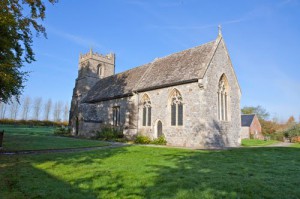 The church in Winterbourne Bassett was dedicated to St. Catherine in the 16th century but was known as St. Peter’s in 1848.  Since 1904 it has been dedicated to ST. KATHERINE AND ST. PETER.  Much of the building is of coursed sarsen rubble with freestone dressings. It has a chancel, a nave with north transeptal chapel, north aisle, and south porch, and a west tower. The earliest features are an early 13th-century font and a late 13thcentury effigy slab in the north chapel.  The chancel and the nave with its aisle and chapel were apparently rebuilt in the mid 14th century although the nave may follow an older plan. In the late 15th century the tower was added, new windows were made in the north aisle, and the south-west corner of the nave, including a window and the south doorway, was rebuilt. Another window on the south side of the nave is of the 16th century. The south porch was added in 1611.  Most of the fittings in the nave, including the pews, pulpit, and font cover, are of the 17th century. The chancel roof, which was lowered at that time, was raised again at a restoration of 1857. New roofs were then built over the nave, aisle, and transept.