About the Play
The action takes place in and around Cafe Rene in occupied France during the Second World War. Rene Artois and his wife Edith own the Cafe and are keeping a priceless portrait  of ‘The Fallen Madonna with the Big Boobies’ by Van Klompt hidden in a Knockwurst sausage in their cellar, along with two British airmen, who the French Resistance continually try to repatriate. The Germans think that Rene is hiding the priceless painting for them.  Many mix ups with various sausages, non-French speaking French Policeman, the Resistance, romantic affairs, various disguises and keeping the Germans happy, keep Rene and staff on their toes. 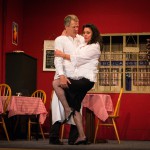 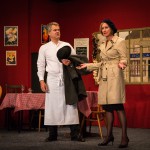 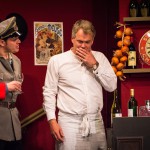 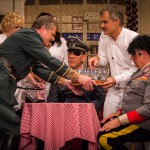 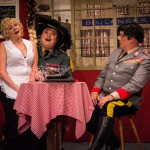 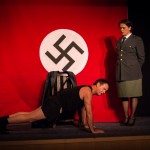 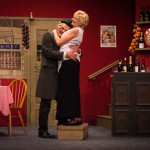 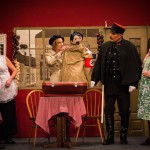 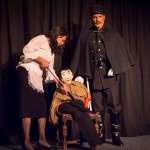 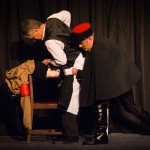 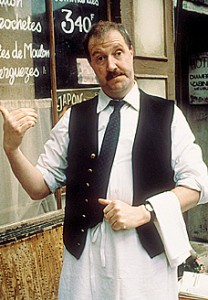 ‘Allo Allo’ on the BBC
The original ‘Allo Allo’ was a BBC sitcom which aired from 1982 to 1992.  There were eighty five episodes in nine series.
Jeremy Lloyd and David Croft  (who also wrote the theme
music) wrote the first 6 series of Allo Allo together with the remaining series written by Lloyd and Paul Adam.
The story, set in a small town café in Nazi occupied France during World War II, was intended to parody other films and shows about war time, particularly Secret Army , (written by Croft) rather than to make fun of the war itself.

Collaboration
In July 1940 Nazi forces occupied the Northern half of the country and the Atlantic seaboard, and the Vichy regime was established in unoccupied southern France. The Vichy regime was effectively a state collaboration with the occupying force, and between 1940 and 1944 it oversaw 650,000 civilian workers being deported to work in Germany and 76,000 Jews being sent to Nazi camps including Auschwitz.  Such state collaboration was perhaps informed by the view that Hitler would defeat England, win the war, and that a new German and Nazi order would prevail in Europe.  The Vichy regime therefore needed to get the best deal possible for France and some collaboration was a requirement in the negotiation process.  This attitude certainly existed in 1940 and 1941, but after the entry of the USA into the war and the occupation of all of France in 1942, there were significant signs of public discontent with the occupation and Vichy regime, with many demonstrations of French nationalism as called for by the Resistance movements. One view of the actions of the ordinary French (rather than those actively engaged in collaboration or resistance) summarises that their compliance with, and lack of opposition to, the Vichy regime amounted to collaboration by default.  Fresh from the shock of defeat, with more concern for the difficulties of everyday life than politics, and with more anti-Allied than anti-German feelings, particularly after allied bombing, there was a general agreement amongst the French that whilst they were desperate to be rid of the German occupying forces, they did not want to use violence to do so. Support for collaboration, or as others call it ‘accommodation’, was not continuous, coherent or committed from all people.  Most believed that collaboration was an expedient measure.  They were not confident of an English victory, therefore, if collaboration could win concessions for France then why not? A lot of French simply wanted to ‘get through it all’. Various levels of collaboration existed, from those involved in Vichy regime, to the denunciation of friends and neighbours to the German forces as enemies of the Nazis, to the everyday doing of small jobs for the Nazi forces in return for gifts of food or other commodities, such as we see mentioned in this show.

Resistance
Thousands in Occupied France chose to resist the Germans and Italians.  Peaceful resistance included ‘go slows’ at work, bureaucratic obstruction, and the hiding of Jews. Resistance early in the war by those living under occupation was by small unconnected groups.  Later in the war more organised active Resistance was supported by the British SOE (Special Operations Executive) and attempted to disrupt the enemy’s communication, assist fugitives like Allied airmen, punish collaborators, and make small acts of sabotage such as happened on the French railways.  Agents from the SOE included women like Pearl Witherington (see below).  Some of the French chose to take up arms against their occupiers. These Resistance leaders were pursued relentlessly by the Nazis.  If captured they faced certain death with executions widely publicised to frighten the population into submission. 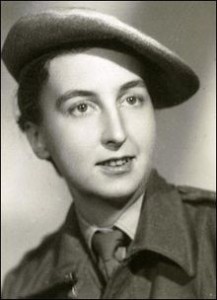 Pearl Witherington
Pearl worked for the SOE, and was one of 39 female agents who parachuted into France to help the Resistance.  Born in 1914 in Paris to English parents, Pearl managed or organise the escape of her family to England 1941 after the occupation.  Frustrated with pen-pushing work in the WAAF, she presented herself to the SOE asking for a job.  After just a few weeks of training she was dropped into France in 1943 with the cover of working as a representative of a cosmetics company.  She worked for 8 months as a courier delivering coded messages to radio operators.  Her greatest challenge came when the leader of her SOE network was captured and she found herself in charge of 1500 resistance fighters known as the ‘Wrestler’ network.  She and future husband Henri Cornoiley managed the ‘Wrestler’ network as it disrupted the Germans, blowing up 800 stretches of railway lines and supply routes.  Such was her success that the Germans put a one million franc bounty on her head.   Pearl and Henri escaped to England in 1944 and married the following month.  Witherington’s name was put forward for a Military Cross but women were not eligible for the medal and she never received it.  In 1945 she received a military MBE after refusing a civilian one.  As recently as 2004 further recognition came in the form of a CBE from the Queen in Paris, and finally Parachute Wings came in 2006. Pearl died aged 93 in 2008.