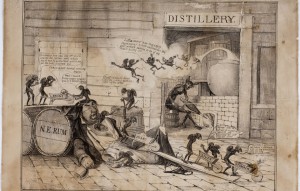 Directed by Jane O’Neill
Programme – The drunkard
Drunkard Poster – Pub
Was Broad Hinton Ready for Melodrama in 2006?  Charles Dickens described good melodrama as like good streaky bacon: the red and the white.  Since then it’s had a bad press.  The term melodrama (from the Greek melos, or song) originally referred to musical plays, such as opera, and some nineteenth century drama in which music heightened the emotional effects of the story. There was a tidy structure or formula to melodrama: a villain posed a threat, the hero escaped the threat (or rescued the heroine) and there was a happy ending.

There were stock characters (just like in that other favourite of BHADS, pantomime), and in the end the balance between good and evil came down the right way.  Life was simple, ordered and predictable.  The usual formula went something like this:
Act I established a strong antagonism
Act II contained the violent conflict caused by the antagonism from Act I
Act III resolved the situation in accordance with sound moral principles.

The plot line had to be very simple so that the audience knew the good from the bad.  Plays were written featuring standard characters such as the noble hero, the long-suffering heroine, and the cold-blooded villain. Usually the hero and heroine underwent superhuman trials at the hands of unscrupulous forces. Suspense was emphasized; the final reversal of fortunes at the conclusion was extreme: certain death to safety; certain disgrace to vindication; poverty to wealth, etc. There was always a series of plot twists, i.e. discoveries, hairbreadth escapes utilizing secret passages, hiding places, disguises, etc.

And don’t think we are not still making melodramas – think Star Wars, Rocky, The Fugitive, and you have the idea…