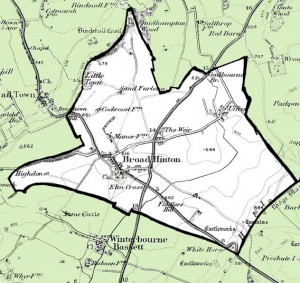 Broad Hinton is a Wiltshire village in an Area of Outstanding Natural Beauty on the edge of the Marlborough Downs, latitude 51˚29’0”N, longitude 1˚50’0”W.   It is 630ft above sea level and eight miles NW of Marlborough. The settlement of Uffcott lies within Broad Hinton parish and comes within the remit of Broad Hinton and Winterbourne Bassett Parish Council for local government purposes. Broad Hinton is part of the West Selkley Ward of Wiltshire Council.

Before the Norman Conquest, Broad Hinton (“Hinton” – hill  town) was held by the Anglo-Saxon Wulfgar.  Broad Hinton was then in the Selkley  Hundred. Wulfgar was probably a Christian since elements of Saxon building  remain in the church of St Peter ad Vincula. His fate is unknown but the  Doomsday Book of 1086 shows that his lands were then owned by Gilbert de  Breteuil, a Norman.  Gilbert held five contiguous estates, including Broad  Hinton, and built Bincknoll (say Bynol) Castle, a motte and bailey  fortification still discernible today, to protect them.  Incidentally, the  Doomsday Book shows that, unlike nearby Clyffe Pypard, there were no slaves in  Broad Hinton. 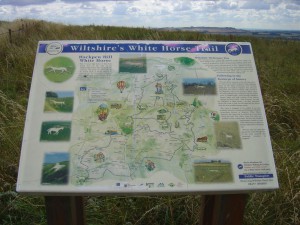 The church tower of St Peter ad Vincula is largely  hidden by trees but there are two other major local landmarks.   The first,  visible for almost 30 miles, is three clumps of beech trees on the Ridgeway,  857ft above sea level.  The Ridgeway is an 87miles pre-historic track which  leads from the  Sanctuary on Overton Hill, near Avebury, to Ivinghoe in  Buckinghamshire.  The second is the White Horse on Hackpen Hill (882ft).    Robert Witt and Henry Eatwell cut this 90ft² horse in the chalk in 1838 to  commemorate Queen Victoria’s coronation.  During the Second World War, the horse  was covered with turf to avoid giving German aircraft a reference point. 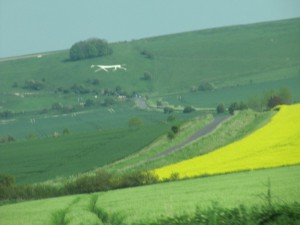 Apart from church records and the histories attached to the  memorials in the church, not much of Broad Hinton’s history is accessible until  relatively recent times.   Census returns show a population of 550 in 1801.   During the 19th century, Broad Hinton’s  population peaked at 714 in  1851 and by 1901, halved to 347.  The lowest point in the 20th century was 304 in 1931.  New housing developments, notably Fortunes Field and  Pitchens End (built 1986-8, pitchens are ancient cobbled paths) raised the  population,  including Uffcott, from 391 in 1961 to 640 by 2009.   Households in  the same period  more than doubled from 112 to 250.  This growth helped secure  the future of Broad Hinton Church of England Primary School,  which was founded in 1743 and has some 100 pupils. 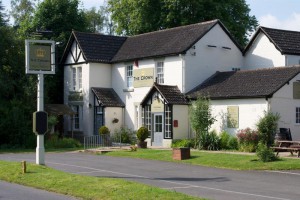 Broad Hinton has two public houses – The Crown on the High  Street and The Barbury Inn (formerly The Bell) on the A4361.   Popularity of the  local pubs led the local vicar to establish a Coffee Tavern in 1880 as teetotal  competition.   Although this thatched building survives as a High Street house,  the business didn’t last long.  Later opposition to drinking came from the  Plymouth Brethren, who had a mission hall around 1900 in what is now a shop for horse riding equipment and other things, and from the congregation of the Primitive Methodist Chapel,  built in 1908 and which closed in the mid-1930s. 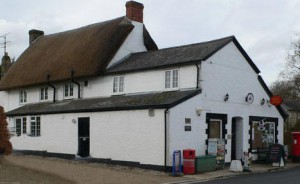 Broad Hinton did have a village  shop originally located in the two  adjoining houses, dated 1746, before moving onto the High Street frontage.  It  took over the Post Office business in 1966 and so became Broad Hinton Post  Office & Stores.  However the village shop had to close down and is now used to sell horse riding equipment and other items.  The Post office is now run in the Village hall every Tuesday morning. 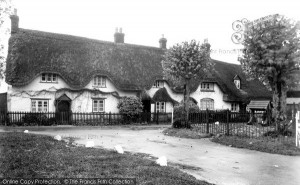 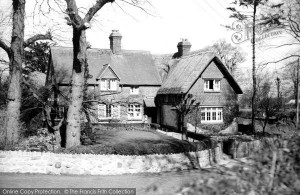