The History Behind the Story

During the early 19th century, Edinburgh was one of the leading cities in the world for medical research. Following the Death Act in 1823, the number of crimes punishable by death dropped dramatically but another law remained. Medical and anatomy schools were only allowed to dissect bodies of criminals who had been condemned to death. With fewer executions in society, there was a huge demand for bodies and medical schools would often pay large amounts for suitable cadavers. This led to a rise in ‘grave-robbing’ – people taking bodies illegally and selling them to medical institutions for large amounts of money. 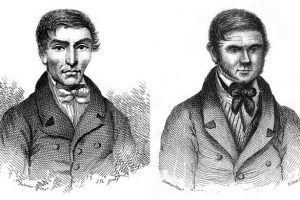 Burke and Hare tells the story of two men who found an alternative solution. Their infamous murder spree began accidentally when a lodger in William Hare’s house died. Hare turned to his friend William Burke for advice about what to do with the body. They decided to sell it to Dr Robert Knox, an anatomy teacher for about £8. Following this, the pair decided not to wait for any more lodgers to die but to murder them instead, all with the aim of collecting large sums of money from selling the bodies on.

We don’t want to spoil the story for you but there is a lot of information readily available about William Burke and William Hare. If you’d like to find out more about the lives of both men then click here to visit the University of Edinburgh’s website. 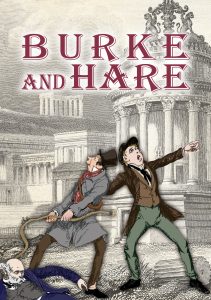 Two Williams, William Burke and William Hare, discover a money making scheme far more lucrative than hosting lodgers. The first rule of business? Supply and demand. In the leading city for medical research, there’s a huge demand for bodies and an inconveniently low number of deaths. The profitable solution? Murder, of course.

As the infamous pair flourish in their new found careers, the more they murder, the less they care but for how long will they get away with it? In a new black comedy that is as hysterical as it is historical, three actors tell the true story of the prolific duo.

The Sackler Trust is Principal Supporter of Watermill Rural Touring